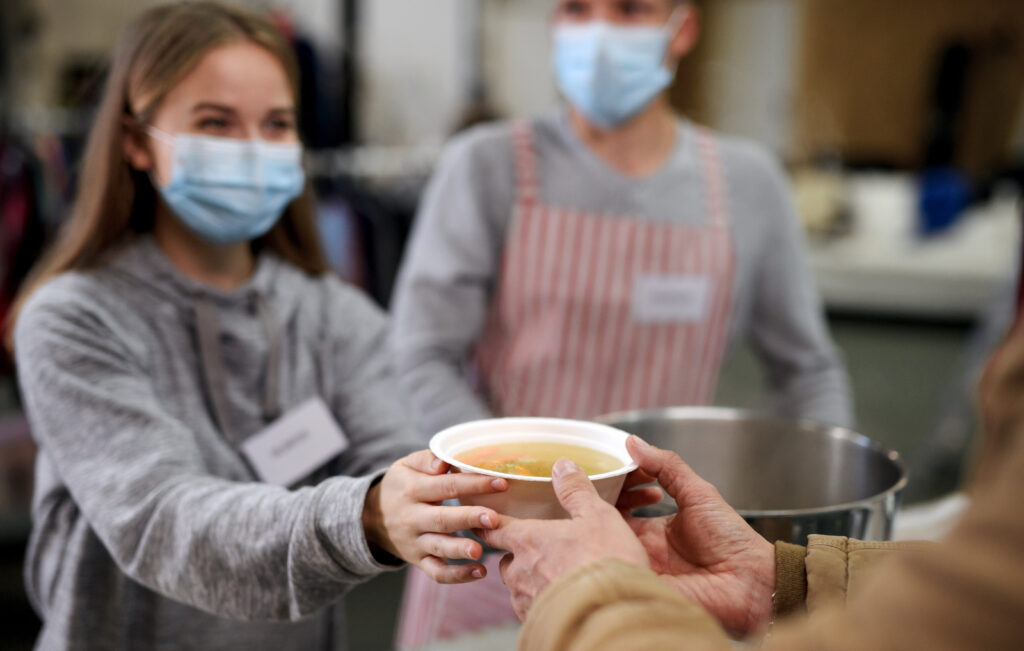 As part of our commitment to philanthropy, WestCMR pays its employees for two days of Volunteer Time Off (VTO) every calendar year. Team members get to pick the charity they’d like to volunteer at, as well as the date. This week, we’ll be highlighting Barrett LaVielle and Ellie Yawn’s time lending a helping hand at the St Vincent de Paul Community Kitchen.

Ellie and I arrived a little after 7 AM to the Clearwater Soup Kitchen ran by St. Vincent De Paul organization. If I remember correctly, “St. Vincent’s Diner” was plastered on the wall to resemble an old-timey diner, melding with the mid 1900’s color scheme and font. While we coincidentally volunteered pre-COVID at “Feeding America” in Tampa, this was the first time either of us had volunteered at this soup kitchen. We entered through a side door and were pretty quickly put to work, donning thin plastic gloves and dull butcher knives in an effort to safely cut the fruit kept in the walk-in. It was a relaxing beginning to what we knew would soon turn hectic — so we took our time crafting a range of bite sized fruits. Since the fruit chosen was left entirely to our discretion I opted to cut open a papaya, a first for me, and proceeded to separate the sticky interior seeds from the flesh. Exotic fruits aside, we cut up bananas, strawberries, apples, and peaches, making sure to only slice fruits we would enjoy eating.

After two large trays were filled with the fruit medley, we were quickly briefed on what operations would look like once the “floodgates opened” according to the owner. The assembly line started with an egg and bacon scramble, then corn on the cob, soup and rice (run by yours truly), salad and fruit (separate entities run by Ellie), and then bread and coffee to top it off. Wisdom imparted on me by a regular made sense the second the doors opened: “fill them soup cups up quickly before you get overwhelmed”. So for a solid 30-45 minutes, a constant stream of hungry humans entered into our diner and I served soup to anyone who wanted some, ensuring to not fill the cup up too much to avoid spillage from shaky hands. The characters we encountered came in all shapes and sizes: tall, short, loose clothes, well-dressed, sun burned, comical, quiet, shifty, and jovial. Ellie and I rotated conversation between ourselves, the patrons who wished to talk that early, and the other volunteers. It was run like a well-oiled machine and there were minimal snags in the operation. Namely, one gentleman held up the line for quite some time to profess his love for Ellie, which was oddly sweet.

The volume of diners waned heavily after about an hour, and only a few trickled in at that point. After receiving copious amounts of thank yous from those that were departing, we were offered coffee and leftover cake from the other volunteers. An unorthodox morning, but cathartic of sorts. We were finally told that we wouldn’t need to bother with clean up, and after plenty of back-and-forth where Ellie and I insisted we could help, we were told to go home a few minutes early. We bode farewell to our fellow volunteers: a Navy Vet, a mother with her autistic son, a high school girl pursuing volunteer hours, and some other characters. It was definitely a Tuesday morning worth remembering.